As I was packing for annual conference yesterday, I came across this stole – given to me by my Northbrook UMC as I left them last July. The Elder I worked with had planned on giving me a stole for my ordination, but unfortunately I left them prematurely. She had the children and youth of the church with whom I had worked for three years draw pictures, which she made into a stole.

As I look over the pictures I am touched by how much they knew me. Pictures of rainbows, of butterflies, of curly-haired stick figures, of peace signs, people holding hands, hearts, sunshines, crosses, music notes…this is pretty much who I am. I remember how excited the kids were to tell me about their drawings. 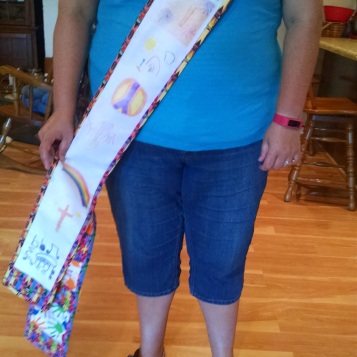 Jonathan pointed out as I put it on like a Deacon stole (like a miss America sash as opposed to how Elders wear their stoles) that smack dab in the middle of my chest is a “no hate.” I thought that was particularly appropriate for this week, as we are all grieving the lives lost in Orlando because of a hate crime.

I struggled yet again with whether to post today or not, because everything seems so trivial in the wake of such a tragedy. But I figured that posting something about love might possibly be the best response we could have in this situation.

This series Countdown to Ordination has written itself, as things have come up in my life that have reminded me of past people and experiences that have influenced and shaped my call and ministry.  I had hoped to write about many other things, yet there’s only one more post after this, so perhaps those will come after the series is over. But I could not finish without writing about Northbrook.

Jonathan found out he was accepted to the PhD program at Garrett in February and we were to move in August. We loved both of our churches at the time and it was incredibly hard to leave, but as the Spirit led, we followed. I was super excited for the new adventure…except for the pesky little detail of needing to find a job.

I searched non-profits, applied for dozens of administrative positions, and flexed my limits a little…but found nothing. Until all of a sudden there were two options in front of me: one I had found online, which ended up offering me a part-time position that probably would’ve fit fine, and Northbrook.

We visited first UMC Evanston because Jonathan thought he might want to go there, and the pastor asked how he could help us. I said, “I need a job.” (half joking, thinking nothing would come of it). Little did I know that he knew many people and had a great deal of influence; not too much later than that, I got a phone call from Pastor Melissa. We talked for awhile on the phone, but I wasn’t sure what would come of it. The interview over google hangout was awkward.

Yet after being offered both positions on the same day, I chose Northbrook.

Little did I know then that serving there would change my whole life and ministry. To be honest, it wasn’t always easy. In fact it was frustrating to deal with North Shore culture (the affluence, the ridiculously overscheduled school and extracurriculuar stuff, the “we want lots of programs offered but won’t necessarily show up” attitude at times). But it was the culture and the amazing people there that challenged my whole way of doing ministry. What I had done for seven years while working in rural NC just wasn’t going to work there.

Because of being so busy and having so many options for how to spend their time and energy, they didn’t need another program to show up to. We knew we couldn’t compete with the flashiest, most high-tech or high energy program. But we also knew that we had something that few (if any) other places in Northbrook did: a welcoming community of people seeking to grow closer together in Love as we tried to make sense of faith and life together.

As I was arriving at Northbrook, they were finishing up a Strategic Visioning Plan which included core values and vision statements that steered our ministry together; two of which highly impacted my ministry:
*to fully integrate children and youth into the life of the church, and
*to help all people develop habits of worship, prayer, and learning.

What this meant was that our time together wasn’t so much about prescribed lesson plans and stuff to do, but rather a way of being that helped connect us with one another and with God. Our children’s and youth lessons were more of a process of exploring stories and learning about the rituals of our faith, not about absorbing facts and doctrine. We played with the order of worship and made it accessible for all ages to participate. We were challenged to make our church fellowship events intergenerational rather than separated by age like so many churches do. And what happened was this beautiful strengthening of a community that seeks to love God and love neighbor.

In a society where people struggle with shallow superficiality, watered down gospels, competition and ego, exclusion and messages of fear and hatred, and trying to keep up with the Joneses, etc., the church should be a place of genuine, authentic community where people find rest from all that crap (otherwise known as evil) which leads us away from the Love of God and from one another. At Northbrook we tried to live in to that Love as we gathered for worship, service, prayer, and learning, and it truly was beautiful (and by all accounts via pictures and social media, it still is).

Words can’t express my gratitude for my time at Northbrook, but I’ll try: thank you, Melissa, for your guidance and leadership – you were such a joy to serve with as we tried new things, letting go of some and running forward with others, challenging each other to be better. Thank you to my youth and children who made it all so much fun and meaningful and whose smiles and laughs I will carry with me always (#nomnomnom). Thank you a million times over to my youth/children’s parents, for patience, for understanding, for your willingness to swim against the current and participate in something bigger than ourselves. Thank you to Alice, for your constant encouragement as my SPRC liaison and for your work to ensure all are welcome. I am a better person and minister because of Northbrook; thank you all for shining God’s love and grace in my life and in your church and community and for giving me courage to do the same.

Things I write about: